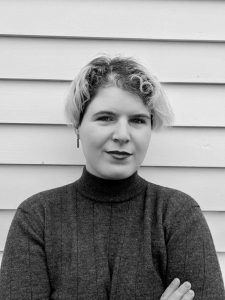 Co-founder of 2W Productions, a theater company focused on two-woman versions of popular musicals (such as “Wicked”, “Grease” and “Chicago”), Alex Brassard is a musician, teacher, and dog lover.  In childhood, Alex did musical theater, took voice and piano lessons, and joined just about every choir in Rhode Island.  In college, studying voice with Daniel Washington, she was a frequent soloist in opera scenes and in choral concerts.  She was selected to join the Middlebury German Institute in Vermont, a German immersion school where she performed scenes from the operas Der Favorit and Gasparone.  Back home in Rhode Island, she began looking for new ways of performing during the Covid crisis.  She and a childhood friend formed 2W Productions and performed online and for socially distanced crowds.  2W was selected to perform their “Chicago” at the Providence Fringe Festival in Summer 2021, where they received great acclaim four nights in a row.

Alex believes in teaching students to take responsibility for their own progress by being aware of their own learning and setting realistic goals for their own repertoire and practice schedules.  She loves working with students of all ages and abilities, and it brings her joy to see her students improve.  She plans to pursue a graduate program in Vocal Pedagogy in the coming year.  Alex has a degree in Vocal Performance and a minor in German from the University of Michigan.

Birthday – January 7
Schools Attended – University of Michigan School of Music, Theater and Dance
Age you started lessons – 10
Instruments You Teach – Voice, piano, guitar, ukulele
Favorite Music to Perform – Everything from arias to folk tunes
Favorite Music to Listen To – Joni Mitchell, Björk, Beyoncé, Jessye Norman, Stevie Nicks, Gillian Welch, Rosalía, Donna Summer
Something most people don’t know about you – I’m a big stand-up comedy fan
Other hobbies & interests – Songwriting, practicing guitar, thrift shopping
Where you were born & grew up – Bristol, RI
Heroes – My parents, and the singers listed above 🙂
Practice Tips – Quality over quantity. When you find a section that needs work, repeat, repeat, repeat at least a few times per week to build motor memory. Whether it’s for piano or singing, committing a piece to memory allows you to get to the emotion of the work when it’s time to perform.