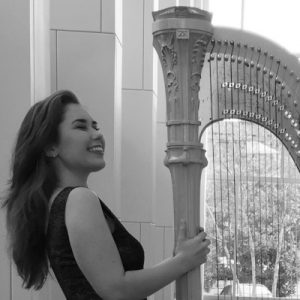 Colleen Murray is passionate about the harp and piano and sharing music with others. Colleen created a Harp-in-Schools program for underfunded schools, demonstrating the harp and performing classical pieces in live programs aired on south Florida public television. Cleveland Clinic Florida awarded Colleen their Arts & Medicine Award and designated her an Honorary Caregiver for her monthly recitals in their hospital. In recognition of her community work with harp and music education, Colleen received the United States Congressional Award Gold Medal, presented in Washington, D.C.  She started studying piano starting at an early age and continues to enjoy the piano in addition to harp and working with a variety of piano students.

Colleen studied solo, ensemble, and orchestral works at summer music festivals, including the Young Artist’s Harp Seminar in Rabun Gap, GA, Sewanee Summer Music Festival in Sewanee, TN, and the Académie Internationale d’Été de Nice, where she studied with Emmanual Ceysson. She earned her B.Mus. in Harp Performance from Vanderbilt University performing with musical ensembles including theater, opera, winds, ballet, and orchestra. Currently, Colleen is pursuing a Master of Music at The Boston Conservatory at Berklee, studying with Ina Zdorovetchi and June Han.

Age you started lessons: I began studying the harp at age eight with Deborah Fleisher.

Something most people don’t know about you: I double-minored in French and Corporate Strategy while at Vanderbilt University.